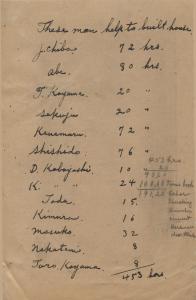 We are hoping you can shed some light on a mystery. We received some donated papers from the Rainbow Ranche. Tucked inside a hard cover Rainbow Ranche diary for 1924 to April 1938 was the piece of paper that I am sending as an attachment. As you can see, it is undated and does not say which house is being built. There is no mention in the diary of any building work being done, but Addie Maehara and Anne Land thought, based on the names in the list, that it might be the house of your parents. Mr. and Mrs. Sam Hikichi. Addie recognized some, though not all, of the names and thought that it might be the late twenties or early thirties.

Would you be able to identify the men, and also the era and which house it was that was being built?

I do recognize all of the names on the list. I deduce from the list that they are from the mid-thirties and they were the group that helped put the west extension on our house on the Rainbow. Mr. Chiba and Mr. Abe worked on the Rainbow and lived near us. The rest of the people on the list were neighbours. I’m trying to put an exact year on the building bee but my memory fails me. Mr. Toda died in 1938 so the list would be previous to that. Incidentally, the list was written by my father as I recognize the handwriting. If I were to guess I would put it as 1937. I would also go to the Rainbow accounts book listing the expenditures and look for that sum of money paid out to Sam Hikichi. He probably submitted that list to the Rainbow for payment. Their procedure at that time was my father would keep the time book for the Japanese workers and he would submit the time sheet to the office and the Rainbow would give him the sum total in cash and then he would pay the workers in cash. I was astounded when I was given the privilege of reading some of the account books to see the thousands of dollars that was entrusted to my father.

The process of archival work is closely allied to detective investigation. As is often the case, it is a network of people with local knowledge who can help with the answers and in doing so, help reimagine the past. Mr. Hikichi’s reply not only pinpoints the house but the year. He also recognizes the writing as that of his father. The house stood on Pow Road until 2011 when it was demolished. Sam Hikichi replaced Toda as the foreman for the Japanese workers. — Laura Neame